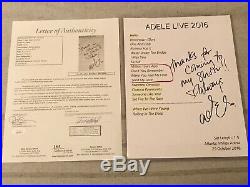 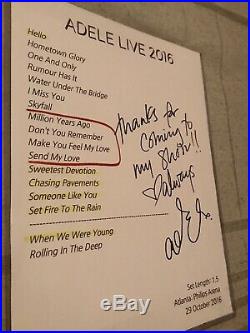 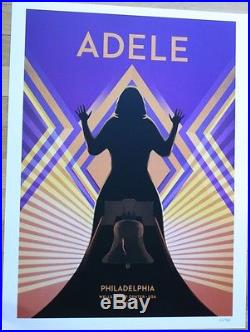 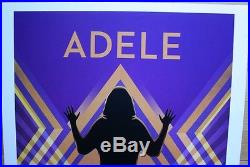 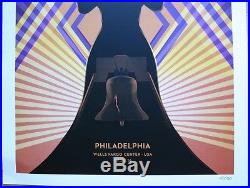 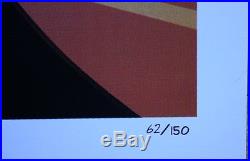 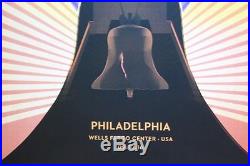 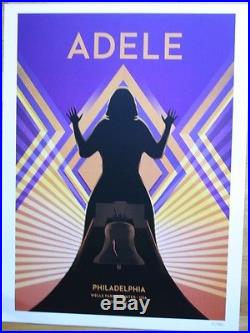 ADELE CONCERT TOUR POSTER FOR PHILADELPHIA, PA. A limited edition poster from the September 10, 2016 Adele concert at The Wells Fargo Center in Philadelphia, PA. It’s a beautiful poster and has the city, venue and date for the show below the Liberty Bell. There were only 150 of these posters made for the show and this one is #62/150. Measurements 24″ x 17″. Adele Laurie Blue Adkins. Born 5 May 1988 is an English singer-songwriter. Graduating from the BRIT School. For Performing Arts and Technology in 2006, Adele was given a recording contract by XL Recordings. After a friend posted her demo on Myspace. In 2007, she received the Brit Awards. “Critics’ Choice” award and won the BBC. Her debut album, 19. Was released in 2008 to commercial and critical success. It is certified seven times platinum. In the UK, and double platinum in the US. An appearance she made on Saturday Night Live. In late 2008 boosted her career in the US. At the 51st Grammy Awards. In 2009, Adele received the awards for Best New Artist. And Best Female Pop Vocal Performance. Adele released her second studio album, 21. The album was well received critically and surpassed the success of her debut. Earning the singer numerous awards. In 2012, among them a record-tying. Including Album of the Year. Including British Album of the Year. And three American Music Awards. In the US it has held the top position longer than any album since 1985, and is certified Diamond. The success of 21 earned Adele numerous mentions in the Guinness Book of World Records. She is the first woman in the history of the Billboard Hot 100. To have three simultaneous top 10 singles as a lead artist, and the first female artist to simultaneously have two albums in the top five of the Billboard 200. And two singles in the top five of the Billboard Hot 100. 21 is the longest-running number one album by a female solo artist in the history of the UK and US Album Charts. In 2012, she released Skyfall. , which she wrote and recorded for the James Bond film of the same name. The song won an Academy Award. And a Golden Globe Award for Best Original Song. After taking a three-year break, Adele released her third studio album, 25. In the UK and US. The lead single, Hello. , became the first song in the US to sell over one million digital copies within a week of its release. In 2011 and 2012, Billboard. Named Adele Artist of the Year. In 2012, she was listed at number five on VH1. S 100 Greatest Women in Music. Magazine named her one of the most influential people in the world in 2012. Terms of Sale: PLEASE READ! All items are guaranteed authentic. (Only for signed items) We are members of the UACC and Manuscript Society. For other fine authentic autographs. The item “ADELE Philadelphia Concert Poster Limited Edition of 150″ is in sale since Monday, September 12, 2016. This item is in the category “Entertainment Memorabilia\Music Memorabilia\Rock & Pop\Artists A\Other Rock & Pop Artists A”. The seller is “inkwellgallery.com” and is located in Gettysburg, Pennsylvania. This item can be shipped to United States, to Canada, to United Kingdom, DK, RO, SK, BG, CZ, FI, HU, LV, LT, MT, EE, to Australia, GR, PT, CY, SI, to Japan, to China, SE, KR, ID, to Taiwan, ZA, TH, to Belgium, to France, to Hong Kong, to Ireland, to Netherlands, PL, to Spain, to Italy, to Germany, to Austria, RU, IL, to Mexico, to New Zealand, SG, to Switzerland, NO, SA, AE, QA, KW, BH, HR, MY, BR, CL, CO, CR, DO, PA, TT, GT, SV, HN, JM.