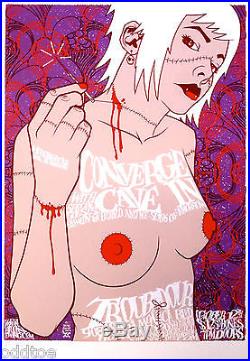 Brian Ewing’s work is a visual kick in the face! Perfect for posters his art captures a surreal world where beautiful girls, zombies & skull people exist only to share the soundtrack of your life, until your ears explode! Check out my other items. Brian’s perpspective on his piece. This is my 1st installment of the “Stitched Girl” series. Just trying to figure out what I wanted to get on paper. Experimenting with backgrounds, text and color combos. I was kinda worried how they would be received… Especially by my female friends. So far so good. I’ve had people offer to pose for the series after I told them what the blood and stitches mean. This piece was inspired by a few people I know. It originally started off as a sketch for the Tsunami Bomb tour poster (the character had clothes on then) but the client opted for skulls over girls. This was originally for another band but it never got printed. I was trying out a new printer that wanted my biz but couldn’t deliver. Someone there had a small problem with the subject matter and refused to print it. All the while, I’m in New York on the Warped Tour, and had no way of getting it to another printer. I didn’t own a laptop, and it never occurred to me to bring a copy of the file with me. The work was done and it sat there. I was bummed, the venue was bummed, the band was bummed and their label was bummed. So here it is, new band and background, and it got printed. I’m happier with this version. I’m a huge fan of Jake Bannon and Converge, so I’m proud that it was used for a cool band. Converge was formed in the winter of 1990 by Jacob Bannon and Kurt Ballou. They started by playing covers of hardcore punk, punk rock and heavy metal songs, being self-confessed “hardcore kids with left-over Slayer riffs”. The band soon graduated to playing live performances in 1991, after recording some demos on a 4-track recorder and eventually releasing full lengths including When Forever Comes Crashing and splits with bands like Agoraphobic Nosebleed. In recent years, Converge have enjoyed relatively high levels of popularity. Their popularity began to rise with the release of their breakthrough album, Jane Doe , the album that was named the number 1 album on Sputnikmusic’s “Top 100 Albums of the Decade”. This resulted in a four man line-up that is still intact today. According to Allmusic, Converge are “regarded as one of the most original and innovative bands to emerge from the punk underground”. As seen on page 18 of Brian Ewing’s book, “Don’t Hold Your Breath; Nothing New from Brian Ewing, ” published by Dark Horse Books. Date: October 12, 2004 Performers: Converge, Cave In, Between The Buried And Me, Scars Of Tomorrow Venue: The Troubadour, Hollywood Designer: Brian Ewing Dimensions: 16″ x 23″ Four-color screen print Signed by the artist. And learn about me. And my exlusive online store. Sign up for our newsletter. We add products weekly and always offer great deals! Can’t find something? I’ve probably got it or know where to get it. Be sure to add me to your favorites list. The free listing tool. This print is an ORIGINAL and a FIRST PRINTING! We received these prints directly from Brian right after they were printed. There has been no middle man or is it being resold. It has been stored flat in a smoke and dust free environment for all these years and now available to the public. Feel free to contact Brian Ewing thru his website for verification. The item “CONVERGE, Concert Poster signed by Brian Ewing, Sexy STITCHED GIRL Series, 2004″ is in sale since Wednesday, October 02, 2013. This item is in the category “Entertainment Memorabilia\Music Memorabilia\Rock & Pop\Artists C\Other Rock & Pop Artists C”. The seller is “oddtoe” and is located in Hayward, California. This item can be shipped worldwide.