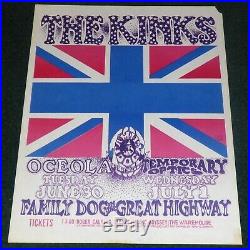 You are purchasing an original 1969 Family Dog on the Great Highway concert poster for The Kinks. Poster does have a small amount of paper loss in top right corner and some mild soiling/tape residue around edges. Image is in great shape. Colors are bright and unfaded. This piece displays great and would look outstanding framed and matted! A wonderful addition to every rock n roll memorabilia collection! Thank you for shopping. The item “THE KINKS FAMILY DOG ON THE GREAT HIGHWAY ORIGINAL 1969 CONCERT POSTER” is in sale since Saturday, March 16, 2019. This item is in the category “Entertainment Memorabilia\Music Memorabilia\Rock & Pop\Artists K\Kinks”. The seller is “ruthrules” and is located in Saint Clair Shores, Michigan. This item can be shipped worldwide. 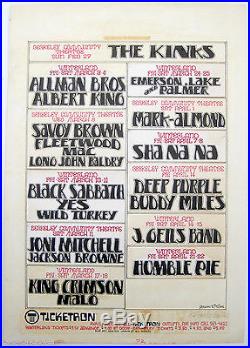 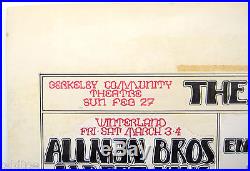 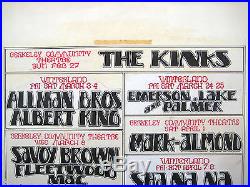 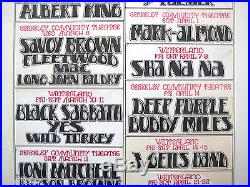 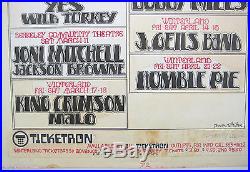 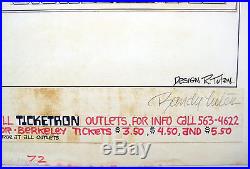 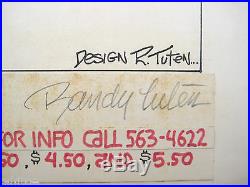 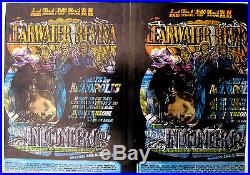 ORIGINAL POSTER PRODUCTION ART. Featuring THE KINKS, ALLMAN BROTHER BAND, SAVOY BROWN. FLEETWOOD MAC, BLACK SABBATH, JONI MITCHELL. KING CRIMSON, EMERSON, LAKE & PALMER, MARK ALMOND. SHA NA NA, DEEP PURPLE, J. GEILS BAND & HUMBLE PIE. Original, one-of-a-kind SIGNED item, by Randy Tuten. In January 1969, after a year of being rejected as a poster artist by Chet Helms at the Avalon, 23-year-old Randy Tuten took his portfolio to the Fillmore where Bill Graham immediately hired him. Tuten was partial to traditional advertising styles, Graham was bound to receive his work as something considerably more akin to his own taste. Randy Tuten is the only poster artist to span 5 decades designing for The Fillmore. He remains a prolific poster designer today, and still a regular producer for Bill Graham Presents and other promoters. Tuten’s work has long been recognized for its seminal influence in the art of modern rock and roll, and has been featured in major museum exhibits as well as in several important book-length retrospective studies of rock art. Though his work shows the influences of the 60’s era, it has also evolved in recent years into an orderly and highly varied style of ornamental commercial art, often reminiscent of the advertising used in the deco era. The general consensus in the rock art community is that he has continued to grow as an artist and may be doing his best, most creative and exciting work at the present time. His posters are now a part of rock history, and for both curator and collector, will always be among the most desirable and telling artifacts of West Coast rock aesthetics. This is a one-of-a-kind mock-up by renowned rock poster artist Randy Tuten for a 1972 poster, advertising upcoming concerts at California venues Winterland and Berkeley Community Theatre, including The Kinks, Allman Brothers, Fleetwood Mac, Black Sabbath, Joni Mitchell and more. It is printed on the back of a 2x uncut Creedance Clearwater Revival poster, see 8th photo. As a piece of production art it is made up of numerous pieces individually glued onto the sheet. It has some wear, markings and discoloration, and a tiny bit of water damage on the very bottom, but is in very good condition over all, and it is SIGNED by Randy Tuten. Please check out the photos, all 8 are of the actual item. It’s a very cool, very rare, signed item featuring lots of great artists and a bit of insight into the poster production process! Date: Produced in 1972, concert dates ranged from February 27th to April 22nd Performers: The Kinks, Allman Brothers Band, Albert King, Savoy Brown, Fleetwood Mac, Long John Baldry, Black Sabbath, Yes, Wild Turkey, Joni Mitchell, Jackson Browne, King Crimson, Malo, Emerson Lake & Palmer, Mark Almond, Sha Na Na, Deep Purple, Buddy Miles, J. Geils Band and Humble Pie Designer: Randy Tuten Dimensions: Approximately 17.5″x25″ (it is not exactly squared off, it’s a bit wider on the bottom than the top) Check out my other items. Be sure to add me to your favorites list. The item “The Kinks Allman Bros Sabbath Orig. SIGNED 1972 Concert Poster Art by R. Tuten” is in sale since Monday, June 01, 2015. This item is in the category “Entertainment Memorabilia\Music Memorabilia\Rock & Pop\Artists K\Kinks”. The seller is “oddtoe” and is located in Hayward, California. This item can be shipped worldwide.