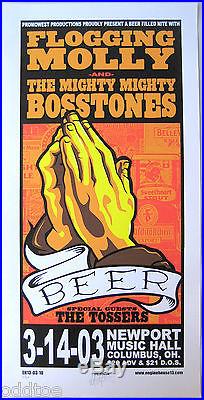 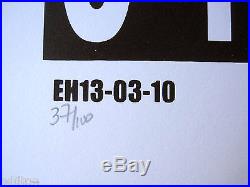 FLOGGING MOLLY & THE MIGHTY MIGHT BOSSTONES. With guests THE TOSSERS. At Newport Music Hall, Columbus OH. Signed and numbered 2003 Concert Poster by Mike Martin of Enginehouse13 Studios. EngineHouse13 was formed in the fall 2000 with the idea to continue to produce limited edition concert art and to keep all involved somewhat sane. EngineHouse13’s brainchild, Mike Martin is a dedicated music lover that cranks out some of today’s best and most recognizable limited edition posters and designs in the world. The founding member of EH13, Mike Martin, is the driving force behind the EH13 phenomenon, the creative mastermind and the glue that keeps it all together and running like a well oiled small block! Mike is an avid pop culture, lowbrow art collector and is a car freak with an affliction for the custom and fenderless four wheel wonders. Now in their 9th year as a fully independent studio, the future is getting brighter and greasier by the day! Flogging Molly is an American seven-piece Irish punk band from Los Angeles, California led by Irish vocalist Dave King, known for his work with Fastway. They are signed to their own record label, Borstal Beat Records. The Mighty Mighty Bosstones (informally referred to as The Bosstones) are an American ska-core band from Boston, Massachusetts, formed in 1983. [1][2][3] Since the band’s inception, lead vocalist Dicky Barrett, bassist Joe Gittleman, tenor saxophonist Tim “Johnny Vegas” Burton and dancer (“Bosstone”) Ben Carr have remained constant members. The line-up also includes drummer Joe Sirois, saxophonist Kevin Lenear, guitarist Lawrence Katz and trombonist Chris Rhodes. The Bosstones are often credited as one of the progenitors of the genre of ska punk and the creators of its sub-genre ska-core, a form of music which mixes elements of ska with punk rock and hardcore. The band had released seven studio albums, three EPs and a live album by the time they announced a hiatus in December 2003. In 2007, the Bosstones reunited to resume recording and touring. The poster is a screen print, in very good condition, signed and numbered by the artist Mike Martin of enginehouse13 Studios, from a limited edition of 100 prints. A pair of hands joined together in prayer behind a flowing banner that reads “BEER”. This was for a 2003 Flogging Molly & Mighty Mighty Bosstones show in Columbus Ohio. Date: March 14, 2003 Performers: Flogging Molly, The Mighty Mighty Bosstones Venue: Newport Music Hall, Columbus OH Designer: Mike Martin/enginehouse13 Dimensions: 13″x26″ Edition: 100 Screen Print. Be sure to add me to your. The item “FLOGGING MOLLY- MIGHTY BOSSTONES ORIG. 2003 Concert Poster s/n by Mike Martin” is in sale since Friday, March 13, 2015. This item is in the category “Entertainment Memorabilia\Music Memorabilia\Rock & Pop\Artists J\Other Rock & Pop Artists J”. The seller is “oddtoe” and is located in Hayward, California. This item can be shipped worldwide.