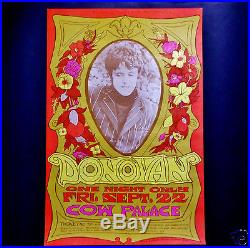 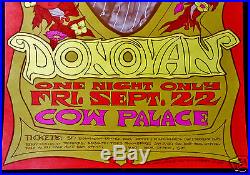 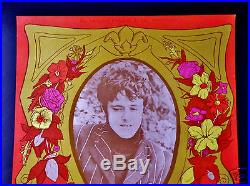 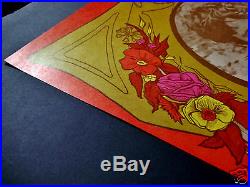 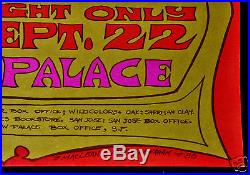 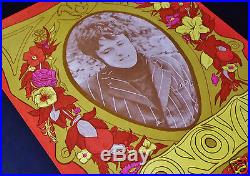 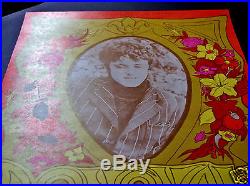 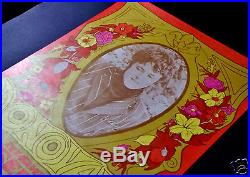 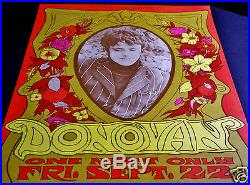 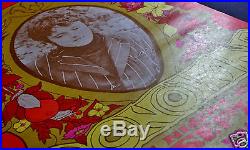 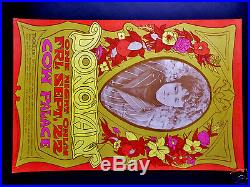 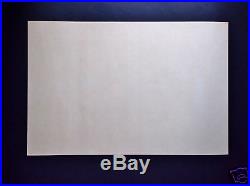 During the “Summer of Love” in 1967, musician, singer, and composer Donovan Leitch could do no wrong. His gift for melody cast a spell over an entire generation. The concert poster that is being offered here is a true piece of 60s Psychedelic memorabilia. It is part of the Bill Graham Fillmore (venue) series of posters which were printed between 1966 and 1971. Normally, the venue for these shows was a rather small theatre in San Francisco (owned by Bill Graham) called “The Fillmore”. However, due to Donovan’s amazing popularity in the Summer and Fall of 1967, Bill Graham decided to lease the much larger “Cow Palace” in San Francisco for “One Night Only”…. This listing is for the VERY FIRST printing of this concert poster (BG-86 1A) It is printed on fairly thick, slightly textured matt bond. What distinguishes a 1stA printing from a 1stB or a 2nd, and 3rd printing, is a yellow mark between the two upper arms of the “E” of “One” and a small yellow area in the bottom curve of the “S” of “Sept”. These printing “errors” were subsequently corrected for later printings. This poster was printed BEFORE the concert on September 11, 1967 in a limited run. This beautiful concert poster was created and designed by Bonnie Maclean. It captures not only the essence of Donovan, the musician and artist, but crystallises a truly magical moment in time…. When anything and everything seemed possible. Size: 14″ x 21 1/8″. Condition: Near Mint Mint…. Colours are vivid and striking. Some age-related yellowing can be seen at the back (see last photo). The item “Donovan BG 86 1st A Vintage Concert Poster Bill Graham Fillmore 1967 Near Mint” is in sale since Monday, April 18, 2016. This item is in the category “Entertainment Memorabilia\Music Memorabilia\Rock & Pop\Artists G\Graham, Bill\Posters”. The seller is “rsir9501″ and is located in Montreal, Quebec. This item can be shipped to Canada, to all countries in Europe, to all countries in continental Asia, to United States, to Australia, to Mexico.