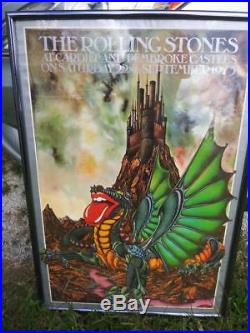 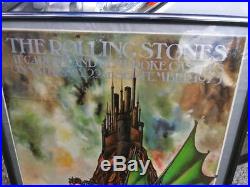 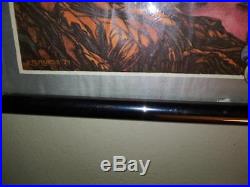 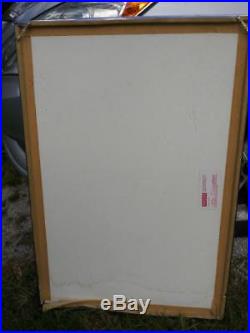 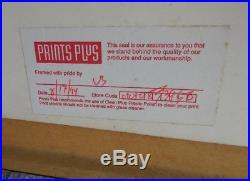 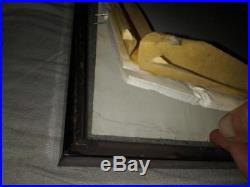 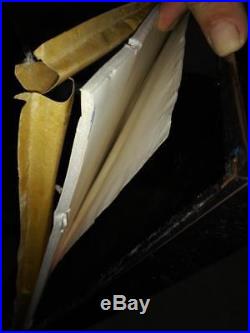 His amazing poster is quite likely the rarest and most desirable Rolling Stones poster out there. This image was designed by K. Burness and was used to advertise a one-day show at Cardiff and Pembroke Castles in Wales in September 1973. Unfortunately, the show was cancelled due to an outbreak of Puritanism by the local government – who were afraid that rock & roll music would corrupt their youth! Right after that the bulk of the posters were destroyed. The small quantity of only 15 to 20 originals that exist in nice condition all came from one source – the artist who created it, Kate Burness. The original poster was printed beautifully in five colors: the normal four-color process plus a fifth layer of solid silver ink for the border and lettering. The overall effect is stunning in fact, we like it so much we have one of these framed and hanging in our office! Because these pieces are quite large and were printed on extremely thin and fragile stock, most have some damage and creasing. The extreme rarity of this poster led to a bootleg that is easily identified by its smaller size and poor print quality. The silver ink on the bootleg is more of a gray color and the entire poster lacks pizzazz. This poster was later reprinted in a smaller size by Muiscom in a numbered edition of 5,000. These are also poorly printed and highly pixilated. The original poster was printed on very thin white stock and measures approximately 20″ x 30″. LETTER FROM ARTIST KATE BURNESS. Yes, I think you do have one of the original Rolling Stones Cardiff Castle concert posters. I’ve looked carefully at the images you sent, & the colours, size, & the look of it generally, convince me it’s one of the ones I had, & gave away to friends. I only have one of those original posters left, but yours looks exactly like it. I was a young artist, only 24, freelancing in London, at the time I created that painting. I gave lots of reproductions of my early work away. I didn’t think about how valuable it might be later on. When one is young, working in one of the most exciting cities in the world at the time, surrounded by world class illustrators, you don’t think like that. At least I didn’t. I gave about 15 of that poster away to friends in London, but they made their way all over the world in the following years, & I have no knowledge of how or where. Some obviously made their way to the States, which is how the Classic Rock Posters people acquired 2 or 3. They told me they have one framed on their wall. I didn’t know most of the posters were pulped & the concerts cancelled until a few years ago, as you will know from my website. The originals were only concert posters to be pasted up all over town, so although the reproduction is good, the paper is lightweight, & not meant to last. The limited edition of 73 that I made at the end of 2014 to launch my website, & tie in with a concert the Stones were doing in Auckland, was on much heavier archival paper, & is signed & numbered by me. I know from the Classic Rock Posters people that there have been many cheap versions produced in the past, including by the Stones themselves years ago, but nothing of the size or colour quality of the one you have. I wish you all the best in the work you do, remembering & honouring your daughter. My boy died at 20, in an accident whilst travelling overseas, so I know what it is to lose a child. Enjoy your poster, & if you want to sell it get it valued first. It will be worth several thousand dollars if it’s in good condition, as it appears to be from your photographs. All the best to you, & many blessings. If you are a collector here is a rare opportunity to own a piece of Stones history! If you have a friend or loved one who is a Stones fan here is the gift they will never forget! NOTE: Poster was mounted to foamboard and has small stains in the lower margin/edge along with some rippling. It does not affect the art or poster as a whole (see pics). & IT COMES WITH THE ORIGINAL ARTIST AS IT’S COA!! The item “THE RAREST ROLLING STONES CONCERT POSTER EVER ONLY 10 20 IN EXISTENCE” is in sale since Saturday, October 20, 2018. This item is in the category “Entertainment Memorabilia\Music Memorabilia\Rock & Pop\Artists R\Rolling Stones\Posters”. The seller is “journeymagazine” and is located in Hollywood, Florida. This item can be shipped to United States, United Kingdom, Denmark, Romania, Slovakia, Bulgaria, Czech republic, Finland, Hungary, Latvia, Lithuania, Malta, Estonia, Australia, Greece, Portugal, Cyprus, Slovenia, Japan, China, Sweden, South Korea, Indonesia, South africa, Thailand, Belgium, France, Hong Kong, Ireland, Netherlands, Poland, Spain, Italy, Germany, Austria, Israel, Mexico, New Zealand, Singapore, Switzerland, Norway, Saudi arabia, United arab emirates, Qatar, Kuwait, Bahrain, Croatia, Malaysia, Brazil, Colombia, Panama, Jamaica, Canada, Taiwan.