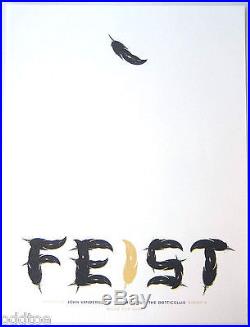 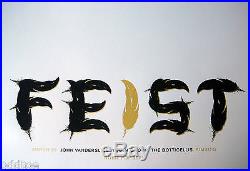 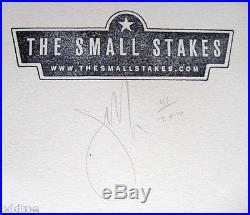 FEIST with John Vanderslice, Youth Group and The Botticellis at Bimbo’s, San Francisco, CA March 28th, 2005. Original Signed/Numbered Concert Poster by Jason Munn, The Small Stakes. Jason Munn (1975) grew up in Neenah, Wisconsin, but now calls Oakland, California home. He began making posters almost twelve years ago for local venues and independent musicians, designing under the pseudonym The Small Stakes. Since the beginning of 2010 Jason has been working simply under his own name. Jason continues to create posters for shows and tours, while also collaborating on projects with companies and organizations such as the San Francisco Museum of Modern Art, Public Bikes, Best Made Co. Jasons work has been recognized in numerous exhibits as well as print and online publications such as Print, Communication Arts, How, Grain Edit, and Its Nice That. In 2005 he was given a Young Gun award by the Art Directors Club. A selection of his posters are part of the permanent collections at the San Francisco Museum of Modern Art, Denver Art Museum, and San Francisco Public Library. Leslie Feist , known professionally as Feist, is a Canadian indie pop singer-songwriter, performing both as a solo artist and as a member of the indie rock group Broken Social Scene. Feist launched her solo music career in 1999 with the release Monarch. Her subsequent studio albums, Let It Die. Released in 2004, and The Reminder. The Reminder earned Feist four Grammy nominations, including a nomination for Best New Artist. She was the top winner at the 2008 Juno Awards. With five awards, including Songwriter of the Year. Artist of the Year. Pop Album of the Year. Album of the Year. And Single of the Year. Her fourth studio album, Metals. Was released on 30 September 2011. In 2012, Feist collaborated on a split EP with metal group Mastodon. Releasing an interactive music video in the process. Feist received three Juno awards at the 2012 ceremony: Artist of the Year, Adult Alternative Album of the Year for Metals , and Music DVD of the Year for her documentary Look at What the Light Did Now. John Vanderslice is an American musician, songwriter, record producer, and recording engineer. He is the owner and founder of Tiny Telephone, a San Francisco Mission District analog recording studio. The Botticellis are an American surf pop band founded in 2003 in Santa Cruz by Alexi Glickman, Zack Ehrlich, Burton Li, and Dave Tranchina. An original signed and numbered poster designed by Jason Munn for a Feist concert in 2005 at Bimbo’s in San Francisco, CA. It is a hand-pulled screen print in excellent condition and from an edition of 200 posters. Feist’s name written with black and gold feathers. The poster is stamped, signed and numbered on the back. Performers: Feist, John Vanderslice, Youth Group, The Botticellis. Designer: Jason Munn, Small Stakes. Signed by the designer. Check out my other items. Be sure to add me to your favorites list. The item “FEIST- ORIGINAL Signed/Numbered 2005 CONCERT POSTER by Jason Munn” is in sale since Monday, March 30, 2015. This item is in the category “Art\Art Prints”. The seller is “oddtoe” and is located in Hayward, California. This item can be shipped worldwide.